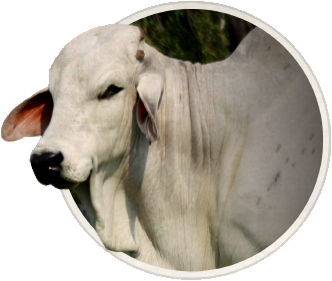 The American Brahman was the first beef cattle breed developed exclusively in the United States. It was bred in the early 20th century as a cross of four different Indian cattle breeds. Today, Brahman cattle are mainly used for breeding and the meat industry. They have been crossbred extensively with a number of other breeds in an effort to acquire the favorable characteristics of the breed. These include a tolerance for heat, a resistance to biting insects (thanks to their thick skin), and their longevity (many still produce offspring at age 15 and older). Crossbreeding of Brahman have led to new breeds such as Brangus, Beefmaster, Simbrah and Santa Gertrudis.

The Ruiz Ranch Brahman bull sires include some of the best quality and highest demanded Brahman sires in the industry. These include performance-oriented sires, calving-ease sires, carcass sires, and a number of champion bulls. The bulls featured here include both artificial insemination sires as well as those available for natural service here on our ranch.

Many of our animals have also been selected by other breeders for crossbreeding with other varieties, not just to create new hybrid breeds, but also to improve size (also known as “breeding up”). Examples of breeds that can benefit from “breeding up” efforts include Brangus, Simbrah, and other Brahman-influenced breeds.

Our Brangus bulls are also world-class specimens. Developed to display the best traits of both their Angus and Brahman ancestors, our bulls are genetically stabilized at 3/8 Brahman and 5/8 Angus. This combination results in a breed that has the outstanding traits of two highly successful parent breeds: the Brahman, with its natural disease resistance, maternal instincts, and overall hardiness, and the Angus, known for its superior carcass qualities.

Many of Ruiz Ranch’s sires are among the most popular in the industry. They also include performance-oriented, calving-ease, carcass, and champion bull sires. Just as with our Brahmans, our Brangus bulls also include both artificial insemination sires and those available for natural service at the Ruiz Ranch.